BELLS OF THE MOSCOW KREMLIN 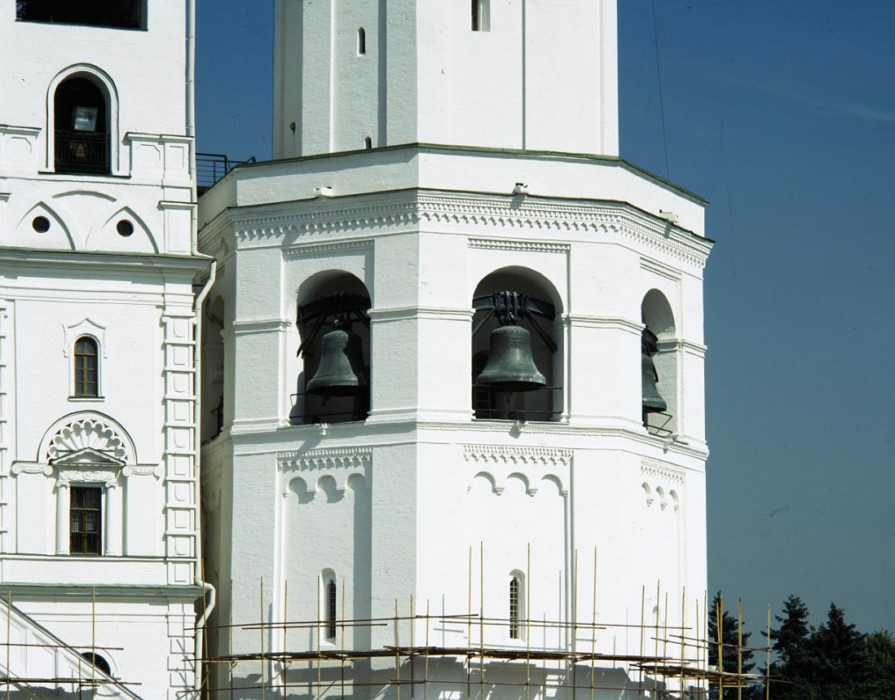 Collection of the Moscow Kremlin Museums comprises thirty-three bells. This unique historically formed complex includes monuments of the 16th-19th centuries, most of which were created by outstanding bell founders. The collection presents heavy bells of large size, almost each with special decoration or historical inscription.

With little exception, all bells were cast out of special alloy, a so-called bell metal, which contains copper and tin. Frequently bells went under destruction due to appearance and increase of flaws owing to metal peculiarities which turned up after exhausting their lifespan, improper hanging of the bell or its tongue and too strong strokes while pealing. Broken bell was usually recast into a new one, sometimes adding some metal. No less than forty bells of the Moscow Kremlin were destroyed in 1929 ‘due to procuring non-ferrous metals’. Among them, there were bells of the 17th-18th centuries from the Ivan the Great Bell Tower, Chudov and Ascension Monasteries, belfry of the Savior on Bor Cathedral, Borovitskaya and Annunciation Towers made by such remarkable masters as Fyodor and Ivan Motorin and Semyon Mozhzhukhin.

Most part of the Kremlin bells is located at the Ivan the Great Bell Tower and the Assumption Belfry, closely bordering on it. In 1508, during the reign of Prince Vassiliy III the two-level belfry ‘for the bells’ was built above the Church of St John Climacus. The third level has appeared in 1600, during the reign of Boris Godunov. The Assumption Belfry was build close to the Bell Tower in 1543. It was meant for the heaviest bells and received its name for being located behind the altar part of the Assumption Cathedral. In order to hang another large bell, an annexe was added to the north side of the belfry in 1624. The annex was named after Philaret, who was the metropolitan at that time.

Today, three tiers of Ivan the Great Bell Tower and the annexes place twenty-two bells. Hardly all of them can be heard at present. Introduction of modern multimedia technologies into the museum exposition let reconstruct and reproduce the sound of the largest bells of the Bell Tower —Novgorodskiy, Swan and Bear. They have the deepest ‘voices’ and are located at the first level correspondingly. Bells of the second level, called ‘medium’, supplement them and weigh from 800 to 3200 kilo. Among them, there are bells Nemchin and Korsunskiy'of the mid 16th century—the most ancient ones remained in the Kremlin. Finally, the smallest bells, weighing from 160 kilos, form the third level. Here hangs the bell of a famous master Andrey Chokhov, who cast the Tsar Cannon.