The 'Ivan the Great' Bell Tower complex situated at the boundary between the Cathedral Square and Ivanovskaya Square is the focal point of the Kremlin. It took more than three centuries to create this ensemble—from 1505 to 1815. It includes three monuments built at different times— the tower of the 'Ivan the Great' Bell Tower, the Assumption Belfry and the Filaret's Annex. 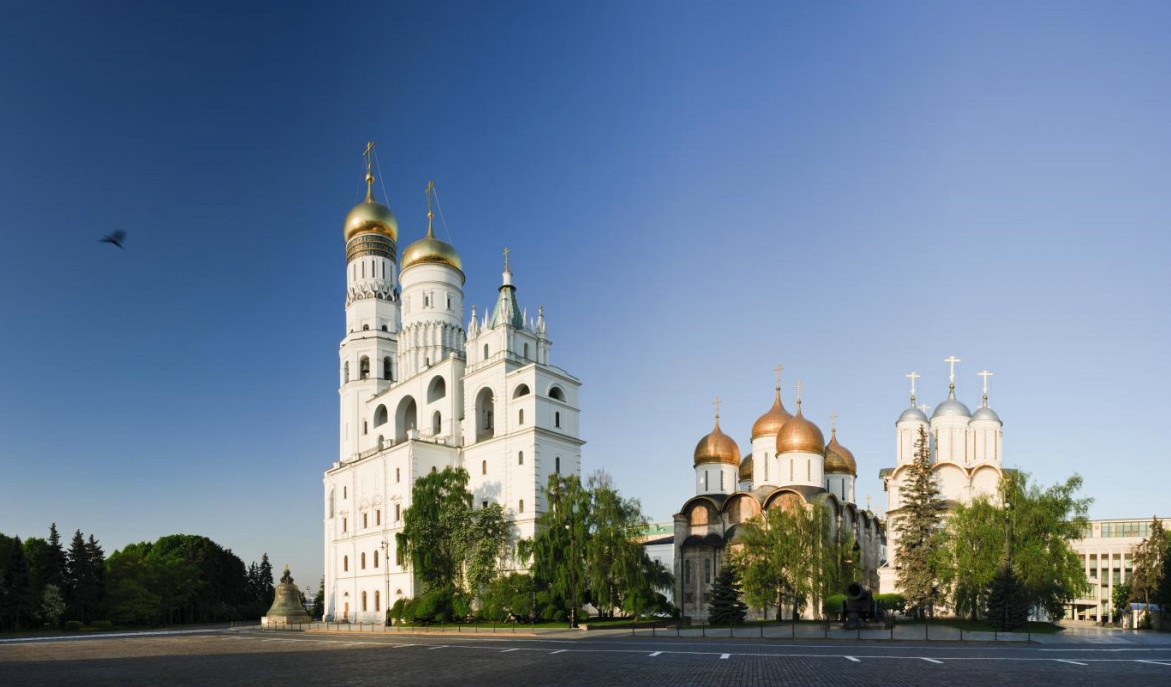 The Bell Tower was erected in 1505-1508 by Italian architect Bon Fryazin. A century later one more tier for the bells was added to the Bell Tower so that its total height achieved 81 meters. The memorial inscription under the dome includes this information—the year of 1600 and the names of Tsar Boris Godunov and his son Feodor. In 1532-1552, a new church was built near the Bell Tower under the project of Italian architect Petrok Maly; it was transformed into a belfry named Uspenskaya (Assumption) at the end of the 17th century. In 1624, architect Bazhen Ogurtsov added a belfry with a tent-shaped top—the Filaret's Annex—against the Assumption Belfry.

In 1812, while retreating from Moscow, Napoleon's Army blew up the 'Ivan the Great' Bell Tower complex, but the 'Ivan the Great' tower has survived. The Belfry and the Filaret's Annex were completely destroyed and restored in original dimensions in 1814-1815. At present 24 bells of the 16th-17th centuries are placed in the Bell Tower and the Belfry.

The ground floor of the Assumption Belfry serves as a functional space for exhibition projects of the Moscow Kremlin Museums. Temporary exhibitions presenting works of art both from the Kremlin's collections and those of other Russian and foreign museums are held there. The unique monument of the Old Russian architecture houses the museum dedicated to the history of the Moscow Kremlin architectural ensemble. Real pieces of the white-stone decor of old Kremlin’s buildings storied in chronicles are presented there. Individual audio guides accompany the excursion tour. The final stage of the self-guided audio tour is marked by a grandiose bird's eye view of the Kremlin panorama observed when standing in the upper gallery.

ôôéÅí
We use cookies on our website
By continuing your visit to this site, you accept the use of cookies and other technologies to ensure the best possible use of our site and for web analytics.